An innovative no smoking programme led by young people in Cambridgeshire has scored winning support from its local football club - Cambridge United.

Kick Ash, an award-winning campaign led by young people to prevent smoking in under 16’s across the county is being endorsed by the club who will be promoting the initiative in its programme, website and newsletter.

Supported by a partnership involving Cambridgeshire County Council, Cambridgeshire PSHE service and Everyone Health’s CAMQUIT Stop Smoking Service, the programme works with 10 secondary schools across the county and their partner primary schools to encourage all young people to be proud to be smoke free, discourage young people from starting to smoke and supporting those who want to quit.

Up to 30 young peer mentors aged 15 are recruited in each school to lead the work in their school and the community.

Since launching in 2009, 952 year 10 students have been trained in county secondary schools to become Kick Ash mentors, who provide informal support to young people who want information and advice on smoking as well as supporting an education programme for year 6 pupils in partner primary schools and year 8 pupils in secondary schools.

Figures from the 2016/17 evaluation show the prevalence of self-reported smoking in Year 10 students is decreasing across Cambridgeshire, with only 10.2 per cent reporting they are current smokers in 2016 compared to 16.6 per cent in 2010.

Cllr Peter Hudson, Cambridgeshire County Council Health Committee chairman, said: “I am thrilled that Cambridge United is backing the Kick Ash programme. Their support will serve as inspiration to young people and show what can be achieved if you look after your health and wellbeing. By working together we hope to change young people’s perceptions of smoking and encourage more schools to sign up.”

Two Kick Ash mentors from Swavesey Village College recently met Cambridge United footballers Sam Squire and David Amoo during a training session to talk to them about the programme and the club’s support of its smoke free message.

Andy Farrer, Health and Inclusion Officer at Cambridge United Community Trust, the charitable arm of the football club, said: “We are delighted to be supporting the Kick Ash campaign, hoping that the Cambridge United players will act as positive role models for local young people. We hope that we can play a small role in encouraging young people to be proud to stop smoking and see an improvement in the health of regular smokers across Cambridgeshire.” 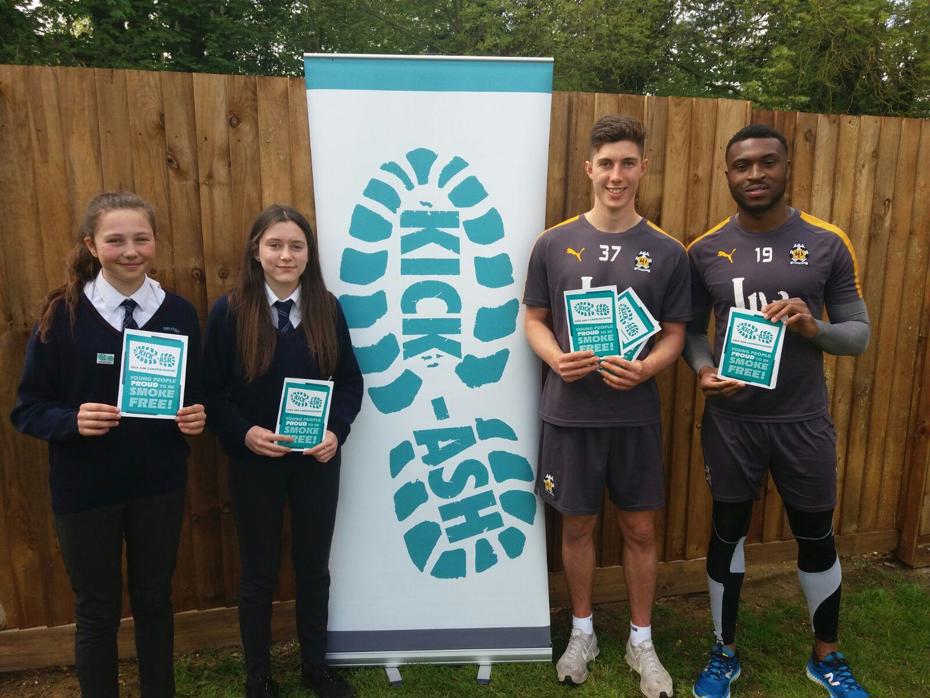