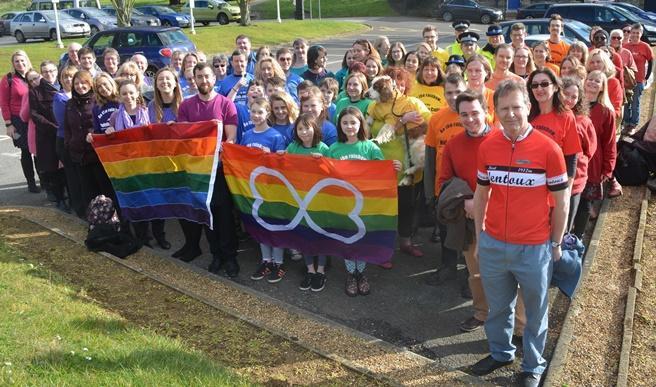 Cambridgeshire is leading the way when it comes to tackling homophobic, biphobic and transphobic (HBT) bullying in its schools ranking in the top five authorities in a prestigious index.

The County Council has been listed as fourth in LGBT equality charity Stonewall’s Education Equality Index 2017, which is published today (June 28).

It showcases how well local authorities from across the country are celebrating difference, supporting lesbian, gay, bisexual and trans (LGBT) young people in school and in their local communities and tackling homophobia, biphobia and transphobia in schools.

Cambridgeshire has ranked in the Top 5 authorities in the Index since its inception in 2011 and has been a member of Stonewall’s Education Champions Programme since it started in 2008. As part of the programme, local authorities work with Stonewall to champion LGBT issues and establish ways of tackling HBT bullying.

Cambridgeshire’s submission for the award was led by CREDS (Cambridgeshire Race Equality and Diversity Service) in partnership with their newly-branded Kite Trust (formerly SexYOUality) – the local charity that supports LGBT children and young people in the county.

They had to submit a range of evidence including how they work with local schools and the community to prevent and tackle HBT bullying, and what elected members have been doing to promote LGBT issues.

Cllr Simon Bywater, the County Council’s Children and Young People committee chairman, said: “We are thrilled to have come in the top five of local authorities in the Stonewall Education Equality Index. Cambridgeshire County Council regards the prevention and tackling of homophobic, biphobic and transphobic bullying to be an essential component of our work with children and young people.

“Cambridgeshire Race Equality and Diversity Service have continued to work with The Kite Trust to further develop our support for trans and gender-questioning young people and their families through increased training in schools and signposting to exemplary practice in Arbury Primary School, one of our School Champions. One of the new initiatives developed is an anti-bullying website providing school staff, families and young people with information and advice on tackling all types of bullying, including HBT bullying.”