Chan pleaded guilty to 12 charges relating to counterfeit toys and 13 toy safety failure offences. Seven for failure of REACH regulations as these toys contained high levels of phthalates, two charges for easy access to button batteries, one for inadequate warning, one soft toy inappropriate for children under three, one toy contained excess quantities of tin and one toy with no product origin information. 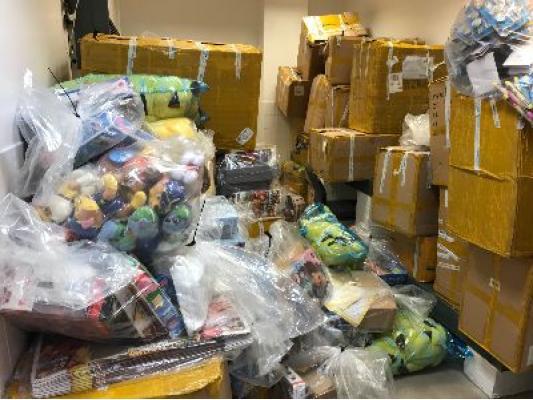 In October 2016, the selling name ‘Kingbox Station’ was identified on e-Bay after a ‘Frozen’ doll was purchased and infringed copyright. A search was carried out at his home address and more than 5,000 of counterfeit and potentially unsafe toys were seized.

Chan denied having any other storage facility however, one was found and it was clear from CCTV it was emptied soon after the house was searched.

During sentencing Judge Hawkesworth said ‘this is a case about the sale of toys you imported from China that included the unauthorised use of trademarks and were also dangerous…I have no doubt your business activity generated considerable profits…despite receiving two warnings from Trading Standards you continued to trade and its apparent that in a storage facility it was likely that goods were removed…the authorities in respect of this type of offending say it is necessary to impose deterrent sentences as they are expensive and difficult to detect and they undermine public confidence in legitimate business. You fell victim to your skill of making money and the ready availability of fake goods from China.’

Chan was given 250 hours community service, disqualified as a director for two years and all counterfeit and unsafe goods were ordered to be forfeited and destroyed. He was also charged with money laundering under the Proceeds of Crime Act, which will remain on file.

Cambridgeshire and Peterborough’s Head of Trading Standards Peter Gell said: “This has been a lengthy investigation as Chan used so many trading names and accounts to hide behind online.

“Ultimately, he knew that the goods he was selling were fake and potentially dangerous as he was given notice by the Port Authorities. He did nothing to recall the goods he sold once he was presented with the evidence that they were unsafe. The Big Hero 6 figure was found to be more than 200 times over the legal limit with the amount of phthalate, which are industrial chemicals, known to be toxic if ingested.

“The team has worked closely with trademark representatives on this investigation and the National Trading Standards eCrime Team without their help we wouldn’t have been able to bring this case to fruition, their support is really important.

“This criminal behaviour impacts legitimate businesses who pay their taxes and work hard to ensure they are selling safe and legitimate toys.”

Watch our YouTube video where you can see the seized toys