A £49m road passing over the River Great Ouse and two railway lines in Ely has officially opened.

Ely Southern Bypass is a 1.7km single carriageway with a viaduct crossing the Great Ouse and a bridge over two railway lines. It will connect the A142 at Angel Drove to Stuntney Causeway.

The bypass which started in January 2017, has been built across a flood plain and poor fenland soils, and is now open to traffic. It will boost the economy and transport links for local people and reduce journey times for drivers by up to 56%.

Roads Minister Jesse Norman said: “I am delighted that Ely’s new bypass is now open to the public - we expect it to bring great benefits to the city, helping to reduce journey times and boosting local businesses.

“As well as cutting congestion, Ely’s bypass should also reduce the risk of accidents at the low underpass on the A142, by providing lorries with an alternative route.”

Cllr Steve Count, Leader of Cambridgeshire County Council, said: “Building this complicated, yet elegant brand new road crossing over a river and two railway lines demonstrates our commitment to improving the roads in our county and helping to stimulate growth.

“Ely Southern Bypass has been a long-term aspiration for residents and local people for more than 20 years and will provide a huge boost for the area and ease congestion in and around Ely by providing a new link between Stuntney Causeway and Angel Drove.

“Many partners, including the Department of Transport, the Cambridgeshire and Peterborough Combined Authority, Network Rail, our contractor VolkerFitzpatrick and East Cambridgeshire District Council have made this project happen and I’m pleased it is now open to traffic.”

Chris Evans, managing director of VolkerFitzpatrick’s Civils division, said: “It is great to see the successful completion of this challenging and rewarding project. The bypass is a significant addition to Ely’s transport infrastructure and I am proud of the role VolkerFitzpatrick has played in making it happen.”

Meliha Duymaz, Network Rail Route Managing Director for Anglia said: ‘Network Rail is proud to have part-funded the new southern bypass for Ely. This bypass will help us to improve safety of the railway by removing the busy level crossing on Station Road and will also improve reliability for passengers by giving drivers of large vehicles a way to avoid the height restricted underpass, minimising the potential for bridge strikes which can delay services.”

Mayor James Palmer said: “I’m extremely proud to have been part of this project, it’s incredibly rewarding to see this vital piece of infrastructure for the county now complete.

“I’m in no doubt that this will improve the lives of people living and working in the area and open the door to further economic growth.”

The project to build the Southern Bypass around Ely has passed many major milestones from creating a unique, specially designed bridge with highly complex structures, to the depths of the foundations for the river viaduct being two thirds the height of Ely Cathedral.

The new route will remove the need for heavy goods vehicles to use the railway level crossing, and avoid an accident-prone-low-bridge.

Ely Southern Bypass contractor, VolkerFitzpatrick, has worked hard to get the brand-new road open as soon as possible and whilst work to the walkway will continue, it will not impact on the new road.

Now the bypass has opened, we can close the underpass to begin working on improving access for pedestrians and cyclists. This closure will also encourage drivers to use the new improved road from the outset.

The underpass work will be carried out under a 24/7 road closure and is expected to last up to 12 weeks from 11am tomorrow (Thursday 1 November), with access for cyclists and pedestrians maintained at all times. This allows the work to be completed safely and as quickly as possible and minimising costs. 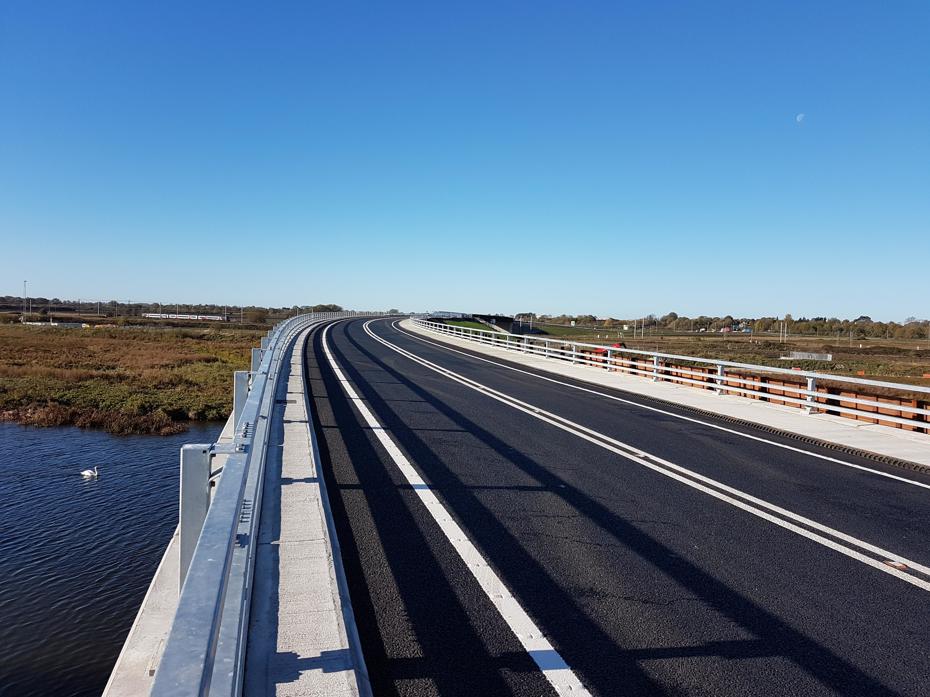