Married to Beverly, Mr Barnwell has been a Deputy Lieutenant for the county since 2004. Mr Barnwell has lived in Wisbech for 40 years and has been involved with many charities in the town over this period. He is currently Chairman of Wisbech and Fenland Museum and Wisbech Charities (which manages the Wisbech Almshouses), and he is a trustee of seven other charities in the county.

Mr Barnwell was honoured by Wisbech Town Council in 2012 when he was appointed an Honorary Freeman of Wisbech. He has been a Rotarian for over 20 years and was appointed a Paul Harris Fellow in 2011 by his home club in Wisbech. Mr Barnwell was for 10 years Chairman of the Wisbech Preservation Trust, and Chairman of the Wisbech Tourism Group for 12 years, and a founder Trustee of the Octavia Hill Birthplace Trust Museum.

Mr. Barnwell was appointed the High Sheriff of Cambridgeshire from 2011-2012.

Mr Barnwell, an Auctioneer, who also farms 800 acres in Northamptonshire, has owned and run Clifford Cross Auctions in Wisbech since 2001, and holds regular auctions of fruit and vegetables, and trees, shrubs and antiques and collectables.

He is well known by locals, especially for his interesting hobby of being an enthusiastic collector of unusual bygones and gives talks around the area “Barnwell on Bygones”, and also on “Old Wisbech” and “Auctions and Auctioneering in the Fens”.

As Vice Lord-Lieutenant for Cambridgeshire, Mr Barnwell will serve his duties until 30 June 2020. 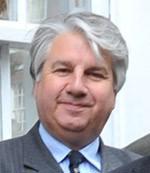