Report backs A10 dualling between Ely and Cambridge.

A new report recommends a £500 million transport upgrade for travel between Ely and Cambridge - including dualling of the A10.

The study, published on the Greater Cambridge Partnership website, says a whole range of transport improvements are needed to ease congestion and bring forward tens of thousands of new jobs and homes right along the route and beyond.

The A10 north is a key transport route for economic growth in the region, linking Ely, and other towns and villages to the north, with the city and wider transport network.

The study looked at current transport challenges and future opportunities to support growth. Recommendations include:

“The road runs throughout East Cambridgeshire and as the former leader of the District I am acutely aware of how the road is blighted by significant levels of traffic. At peak times it's often at a standstill.

"Clearly with the significant amount of housing planned for Waterbeach and North Ely there is no alternative to significant investment and for the road to be upgraded as soon as possible.

“As Mayor pushing for significant improvements is a top priority for me. This report provides the necessary evidence base for the case for investment to be made."

Cllr Francis Burkitt, Chair of the Greater Cambridge Partnership, said: “This is an important piece of work which will now allow for progress on this strategic transport route to be accelerated.”

Rapid growth in recent years has seen demand on the local network surge with roads, junctions and rail journeys all frequently operating at capacity.

Tens of thousands of new jobs and homes are planned along the route - including between 8,000 and 10,000 new homes at Waterbeach alone and plans for further development in North Cambridge.

At this stage, no options or routes have been put forward as the best solution as only preliminary desktop modelling has been undertaken. Further, detailed work needs to take place – including a full public consultation.

Cambridgeshire County Council’s Acting Assistant Director, Infrastructure and Growth, Bob Menzies said, “Rapid growth in recent years has seen demand on the network surge, with roads, junctions and rail journeys frequently operating at capacity. This has led to peak-time congestion over longer periods, with the potential to hinder future growth with no action.

“It is vitally important though that we recognise that, as well as increasing road capacity, we also need new and improved rail, bus, cycling and walking solutions to solve the problem.”

Cambridgeshire County Council’s Chair of the Economy and Environment Committee and Transport Portfolio for the Greater Cambridge Partnership, Councillor Ian Bates said: “This study has taken a lot of hard work, and it’s great it is now in the public domain so that elected members and local people can have a good look through the options before we engage in conversations about this later this year.

“There will be lots of opportunities for residents to consider the options and give feedback before any decisions are made.”

Cllr Lewis Herbert, leader of Cambridge City Council and Vice Chair of the Partnership, said: “The provision of quality public transport from Ely and Waterbeach, including on-road or off-road priority for the last five miles of the journey linking with Milton Road and into the city, is essential - dualling by itself won’t work.

“We need both a modal shift on commutes into the city and an answer from Government in 2018 on what extra A10 works they will fund.”

The study was commissioned by the Greater Cambridge Partnership and carried out by Cambridgeshire County Council and consultants Mott McDonald.

The report is due to be considered at meetings of the Partnership, the County Council’s Economy and Environment Committee and the Combined Authority before any next steps are agreed.

The first of those meetings will be the GCP’s Joint Assembly at Shire Hall on 18 January before the GCP’s Executive Board and County Council’s Economy and Environment Committee meetings – both of which take place on 8 February.

The report will then be considered by the Combined Authority’s Board on Wednesday 28 February.

The public will be invited to give their views on the initial options for various cycling, walking, public transport and road-based solution improvements in and around the A10 during the summer. 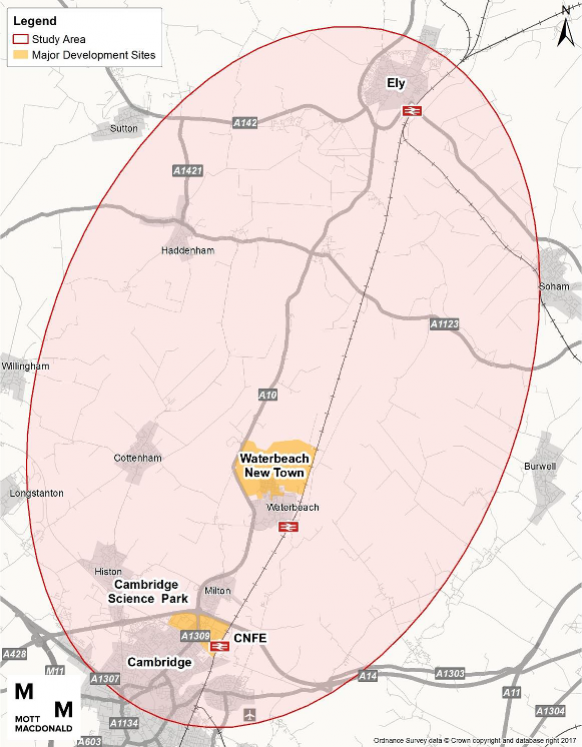