A scheme to improve safety and make better provision for cyclists and pedestrians at the Perne Road/Radegund Road roundabout in Cambridge has proved to be an overwhelming success in terms of accident reduction.

The roundabout is part of the Cambridge Ring Road linking Addenbrooke’s with Abbey ward, and is well used by commuters as well as school children, as it is located very close to a number of schools.

The improvement scheme included the introduction of an overunnable blockwork strip in the centre of the roundabout, reduced carriageway width, and new traffic islands introduced on each arm providing safer crossing points. These features were designed to influence slower approach and departure speeds, and to generally reduce the speed of drivers while going around the roundabout.

The scheme also included the creation of wider cycle paths around the edge of the roundabout giving cyclists the choice of riding around the edge, away from traffic, or riding on the road mixing with slower traffic.

From 2006 to when works commenced in February 2014 there were 27 recorded personal injury accidents, with 23 involving cyclists, of which five were serious and 22 were slight. But in the three years since work commenced on site and has been completed there have been no accidents.

Cambridgeshire County Councillor for Romsey Ward and Cycling Champion Noel Kavanagh said, “The scheme has been successful on a number of counts. The design has influenced slower traffic speeds and this has improved safety for all road users, particularly cyclists. The scheme tidied up the area generally, and introduced more greenspace at the expense of tarmac.

“Since the scheme was introduced the adjacent shops have been redeveloped giving a more pleasant and safe environment for local residents, commuters and the many school children who use the roundabout every day”.

These improvements are part of a multi-million pound investment in cycling schemes delivered or planned for the city and the surrounding area over the coming years by Cambridgeshire County Council and the Greater Cambridge Partnership. With safety at the forefront of all forthcoming projects, the aim is to help encourage more people to travel by two wheels instead of four.

Other projects range from traffic signals that give priority to cyclists and floating bus stops, to the UK’s first Dutch-style roundabout, which has been approved for Fendon Road/Queen Edith’s Way and will also give priority to pedestrians and cyclists over motorists.

Cambridge remains the UK’s number one city for cycling, with 33 percent of all residents cycling three times a week and almost half dusting off their handlebars at least once a week. 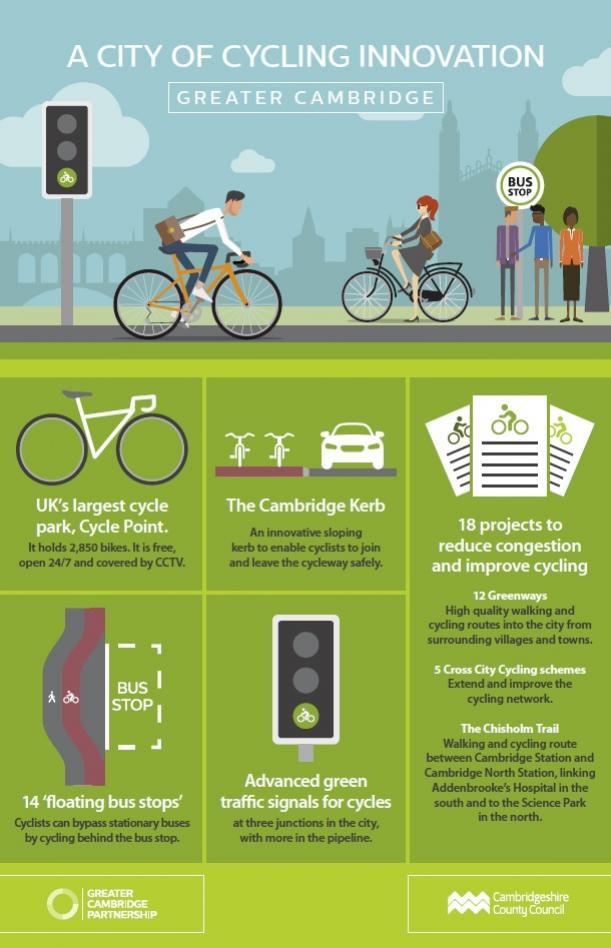