Huntingdon based TAG Bikes have received just under 50 bikes, donated by Govia Thameslink Railway (GTR), since putting out an appeal just before Christmas.

After featuring on regional TV and Radio within the first week of 2018 the team received 99 bike donations - from people from across the region, who hand delivered them to their workshop. They have been overwhelmed by the community support they have received.

Based in Huntingdon Community Centre TAG Bikes project is part of the Cambridgeshire County Council run Supporting into Work Programme which provides guidance and support to individuals with learning disabilities.

The workshop is run by an enthusiastic team of learners who carry out servicing and repairs on donated bikes, to re-sell them as brand new. The project aims to build learner’s confidence and skills to prepare them for future employment and to help build their independence.

One of their biggest donation to date was made by the national rail company Govia Thameslink Railway, which runs Great Northern and Thameslink trains after one of their Distribution Managers who is also a Cambridgeshire resident, saw their TV feature on regional news. The donations were gathered from unclaimed items held at train stations – and are being delivered all the way from theirLetchworth centre. This takes the TAG team donations collection close to the 150 mark in just the first four weeks of the year.

TAG Bikes Employment Skills Worker for Cambridgeshire County Council, Robert Bierton said, “We are always extremely moved by the generosity and kind hearts that exist out there, especially in our region. The recent response we have received from media coverage has been astonishing and positively overwhelming, there has been a magical feeling in our workshop since.

“The bike donations we receive are vital to the success and development of TAG Bikes. Supporting into Work TAG Bikes has never been about financial gain but more directed towards our learners’ development and getting our finished bikes back into new homes, without these donations we would not be able to do either.”

He added, “Myself and everyone involved with TAG Bikes are very proud of what we have built here in Huntingdon and would like to say a massive thank you to all that have supported us in recent weeks and over the past three years. We have the feeling another wonderful year is ahead for TAG”.

GTR Passenger Services Director Stuart Cheshire said: "More and more people are cycling to our Thameslink and Great Northern stations because we've been putting in better facilities with new racks and CCTV.

"Surprisingly, some people do abandon their bikes so when we heard the plea to help this great Supporting into Work project, we got straight in touch. There's no better cause I can think of to benefit, and we're glad to help."

To find out more about TAG Bikes visit their Facebook page: https://www.facebook.com/TagBikesHuntingdonCommunity/ 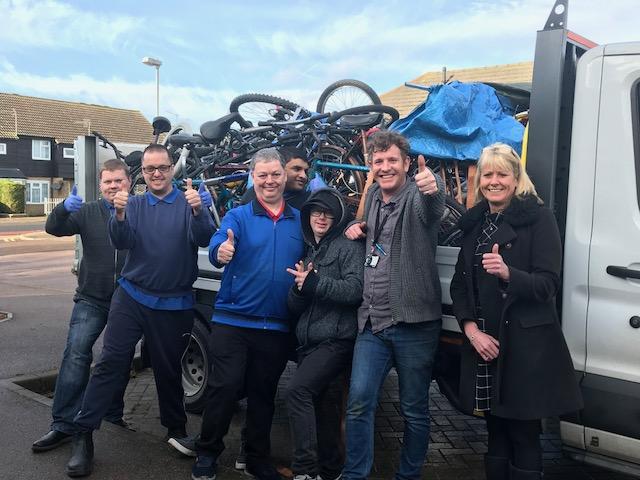