While the football World Cup is an exciting time for fans all over the globe – it can also bring with it a rise in domestic violence and increased binge drinking.

That’s the warning from Cambridgeshire and Peterborough Domestic Abuse and Sexual Violence Partnership and Public Health who are working together with agencies across the county to raise awareness of these issues during the tournament.

Most football fans are looking forward to the World Cup, which began yesterday (June 14) in Russia with the final on the 15 July, and are planning where and how they will watch the games and celebrate the results. But some people will celebrate or commiserate in a way that adversely affects others.

The research, which monitored police reports of domestic violence during the World Cups in 2002, 2006 and 2010, found in one force area in England and Wales violent incidents increased by 38 per cent when England lost – but also rose by 26 per cent when they won.

While domestic violence rose after each England game, incidents also increased in frequency at each new tournament. Separate national research examining the 2010 World Cup echoed the Kirby findings – with domestic abuse reports up 27.7 per cent when the England team won a game, and 31.5 per cent when they lost.

Alcohol consumption will also increase during the World Cup with particular increases in binge drinking. Whilst alcohol is not a reason or excuse for domestic abuse, there is evidence that alcohol is often involved in incidents and that violence is often increased by excessive drinking.

Cllr Peter Hudson, Cambridgeshire County Council’s Health Committee Chairman, said: “The World Cup is a great and exciting time and we all hope our respective countries do well. However it is very concerning that figures show domestic abuse rises during the World Cup – this great sporting occasion should be enjoyed by all and no one should be living in fear that they may be abused”.

Community Safety Partnerships are supporting the campaign and posters are being displayed across the county throughout the World Cup. The partnership has also shared its resources with other Domestic Abuse Partnerships in the Eastern Region and will be posting on social media throughout the tournament.

Further support and advice for professionals and anyone experiencing domestic abuse can be found on our website http://www.cambsdasv.org.uk/website and support for anyone wishing to seek help for their substance misuse can be found at  http://www.inclusion-cambridgeshire.org.uk/ for Cambridgeshire and https://www.changegrowlive.org/content/aspire-peterborough for Peterborough.

Cambridgeshire County Council is also supporting the White Ribbon Campaign to end male violence against women, once and for all. White Ribbon have resources to support the World Cup campaign which can be found on their website www.whiteribbon.org.uk 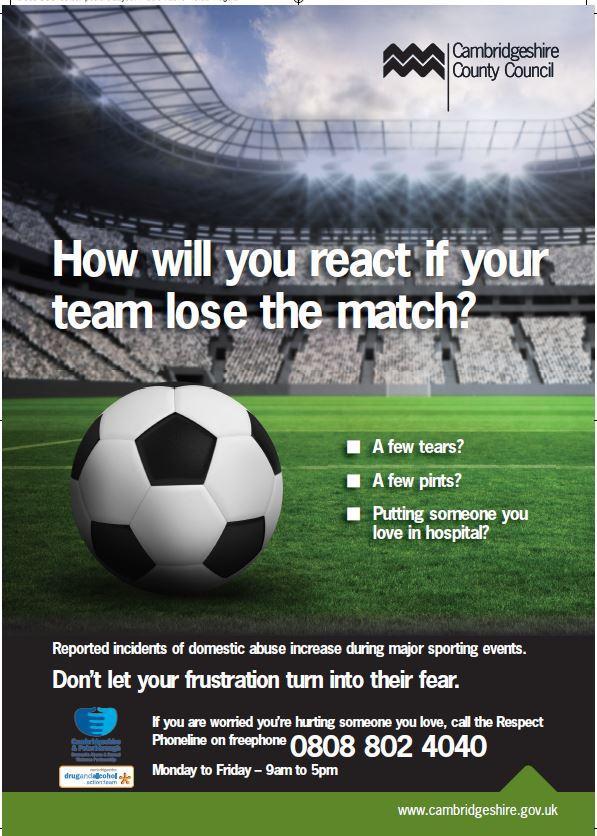