A significant milestone has been marked in the building of Cambridgeshire’s largest education campus with a special turf cutting ceremony.

Councillors and partners of the project gathered at the site of the new Northstowe Education Campus on Wednesday (November 21) for the occasion which marks the start of the first phase of the scheme.

Cambridgeshire County Council received the go ahead to develop Phase 1 of the Northstowe Education Campus last month, in partnership with South Cambridgeshire District Council and Homes England (HE), the government’s national housing agency.

Cllr Simon Bywater, Chairman of the Children and Young People Committee and Cllr Peter Hudson, local member for Longstanton, Northstowe and Over at Cambridgeshire County Council cut the turf to mark the start of the construction work watched by project partners.

“This is a significant milestone in the building of Northstowe Education Campus and is the culmination of many years of working together in partnership to get where we are today,” said Cllr Bywater.

“This is a truly one-of-a-kind, landmark project bringing all core education and community facilities together into one place for the children of Northstowe and Longstanton and the wider community.”

Located on the site of the former RAF Oakington base on the northwest edge of Cambridge, Northstowe will be a sustainable new development with up to 10,000 new homes and an anticipated population of around 24,400 people.

Cllr Peter Hudson, local member for Longstanton, Northstowe and Over, said: “Today is an important stage in delivering the vision for Northstowe Education Campus. It will not only benefit children at the school, people living in the town but all the surrounding communities and I look forward to seeing the school taking shape in the months to come.”

The secondary school, planned to open in September 2019, will be run by Cambridge Meridian Academies Trust (CMAT) and will provide places for up to 600 pupils aged 11-16.  It will then be extended in two subsequent phases to 1,200 and finally 1,800 pupils.  The timing of these phases will be dependent upon the pace of housing development and demand for places from families moving into the catchment area.

The school will be the seventh secondary school to join CMAT and will work closely with CMAT’s other schools across Cambridgeshire and surrounding areas, including Swavesey Village College, which has been rated ‘Outstanding’ by Ofsted since 2011.

Andy Daly, Executive Principal of Swavesey Village College and Northstowe Development for CMAT said: “Having been involved in the planning and delivery of the Northstowe Learning Community since 2007, we are delighted to see further progress on the new secondary school and its fantastic facilities. We look forward to continuing to work with the community in Northstowe and Longstanton over the coming weeks to decide on the new school’s uniform and house names.”

Kier Construction and Faithful and Gould are working with the County Council on the project, which once complete will also include a 400-place sixth form college co-located with the secondary school, a primary school and a nursery, an eight-court indoor sports hall, gymnasium, café, dance and fitness studios and outdoor community sports facilities.

Dennis Cotton, Operations Director for Kier said: “Kier is very proud to be delivering the new Northstowe Education Campus. The turf cutting ceremony is an important milestone, and everyone should be congratulated on their hard work so far to get this project to site.”

Construction of the first 1,500 homes has already begun while Homes England, who are leading phase two of Northstowe, have prepared the land for the building of the campus. They will also oversee the creation of more than 3,500 new homes, retail and office space as part of plans for the town centre once planning permission has been granted.

It is hoped phase two, which also includes a new civic centre, library and health centre will be completed by 2030. The final phase will deliver the remaining 5,000 homes.

Cllr Simon Bywater, Chairman of the Children and Young People Committee and Cllr Peter Hudson, local member for Longstanton, Northstowe and Over at Cambridgeshire County Council cut the turf to mark the start of the construction work. 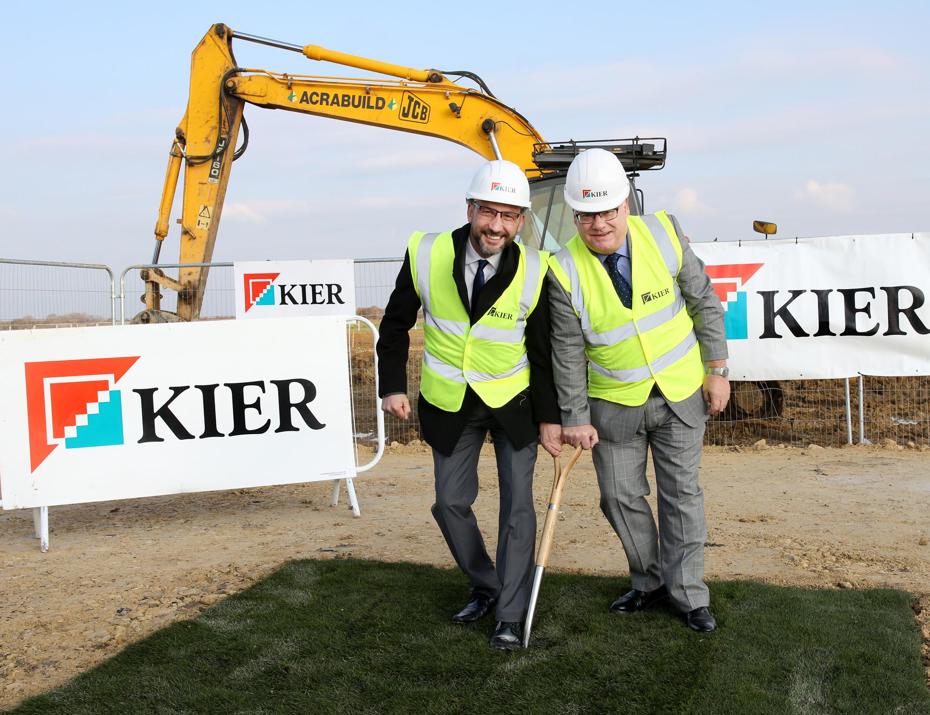