Reports are being received that fraudsters are taking advantage of Coronavirus and people’s isolation. Please see the scam prevention resources webpage for materials to help support your community.

The Cambridgeshire and Peterborough Against Scams Partnership (CAPASP) is a county-wide partnership of public, private and voluntary sector organisations committed to working together to stop scams and doorstep crime across the county.

A SCAM champion talking to someone about scams

Become an Against Scams Partnership supporter

Will you take 5 simple steps to protect residents from the financial and emotional harm caused by scams?

We are delighted to offer you - and your community - the fantastic opportunity to join the growing legion of CAPASP supporters and make a real difference to your residents.

You know your community as well as anyone. You are best placed to make a positive difference to the lives of others within your community, protecting them from the financial and emotional harm of scams. 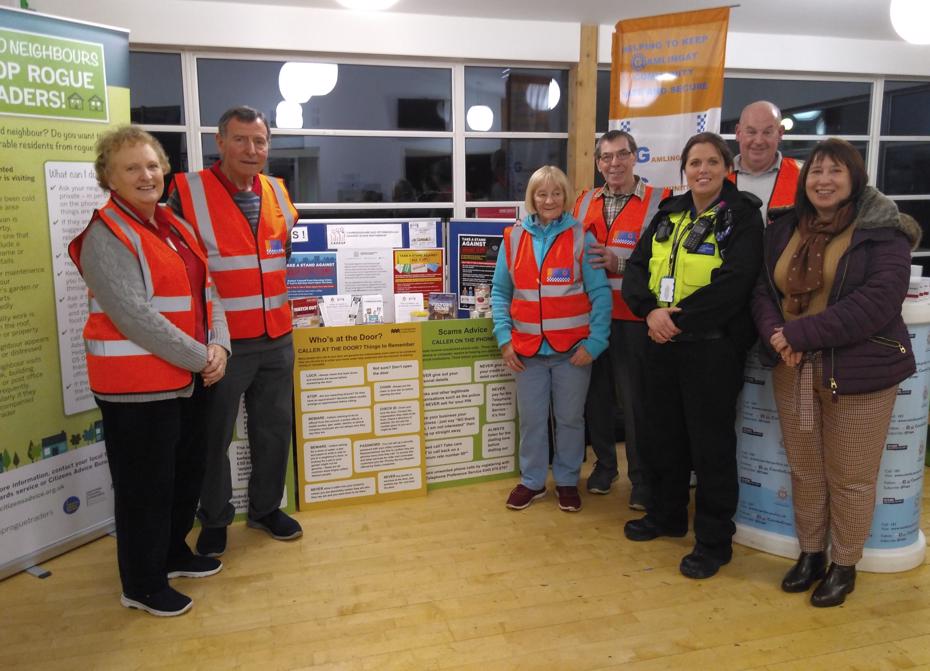 Becoming a supporter costs nothing yet brings huge rewards. Local councils, community groups, charities, businesses, schools, housing associations and other organisations or individuals can become supporters. You will receive useful information from CAPASP to share with your community. This includes information on the latest scams, or new funding opportunities, for example.

Supporters have access to resources such as posters and leaflets. These include general information on scams and details of local support.

Information about local scams and sources of support can make a real positive impact on people. And if you join us as a supporter we love to celebrate you and the great things you are doing through this website and our social and other media.

So if you are inspired to deliver '5 Simple Steps' to spot scams and stop scams within your community we'd love to welcome you today as an official supporter!

Scams are fraud and fraud is crime. Being a victim of this crime can have a devastating impact. These crimes are often targeted at people in our communities that are vulnerable for a variety of reasons, including poverty, isolation, frailty, disability, cognitive impairment, and by the very nature of them being specifically targeted.

To report a fraud, or suspected fraud, and share information to help stop others from becoming victims, call Action Fraud on 0300 123 2040.

How are we going to do it?

The CAPASP is united in taking a stand against scams and making Cambridgeshire and Peterborough a hostile county to criminals. Join us in making a difference and commit to the Charter.

We will work together in partnership to raise awareness of scams and to support victims of scams. Scams are fraud, and fraud is crime. Together we will take a stand against scams by assisting people to protect themselves, helping prevent people from being targeted by criminals and identifying and supporting any victims of scams. We are committed to the Charter’s four key aims:

Sadly this is not a story of fiction. Carol was the victim of a sophisticated romance fraud which has continued to cause years of devastation. Here Carol tells her story:

On 9th January 2014 my life changed forever when I discovered that I'd been a victim of a sophisticated fraud. That moment left me in complete shock and devastation that this had happened to me, that ‘Ben’ had been lying to me since September 2013 when he first contacted me on a dating website.

It all began when Ben contacted me through that website, knowing that I was looking for companionship, possibly romance, after a divorce from my husband. I responded to his message & we carried on talking, initially briefly via the website, then via emails & Yahoo messenger.

At that time Ben said he was preparing for his business to ship 10 x 40ft containers of constructional building goods to Accra in Ghana and that therefore he was very busy and wouldn’t be able to meet with me until it was completed & delivered to the port for shipment.

Ben elaborated the story by saying that prior to the trip to Ghana he had to visit his Swedish mother in Stockholm (the place of his birth) as she was suffering a heart complaint - so again we couldn't meet up. However I was happy to keep in touch via texts, mobile calls & the internet.

On 11th 0ctober 2013 Ben claimed to be travelling to Accra from Stockholm, via Amsterdam, with his return date to the UK being 19th October. I was really looking forward to actually meeting Ben & beginning our lives together.

This is when he first requested financial assistance. Ben told me there were extra port taxes to pay and that he couldn't access his bank account, so asked if he could borrow the money. Thinking nothing was wrong, and becoming ever closer, I did so.

Soon followed the request for me to help with the renting of a second warehouse as the goods shipped wouldn't all fit in the first one. Again I helped, still not realising anything was amiss, taking out an unsecured loan of £20,000 from my bank. All the time Ben continually reassured me saying he'd pay me back and to keep accurate records for him so he could refund the money on his return to the UK - which unfortunately was to be delayed by a week due to the delay in renting the second warehouse and clearing the containers.

On 25th October 2013 Ben contacted me in distress; a terrible accident had happened at the warehouse. One of the forklift drivers had been killed when the container he was moving fell on him. Ben had to remain in Accra and had to pay the family of the dead man £50,000 in compensation. We were both very upset and Ben was asking lots of questions about how he would meet the compensation demands. He said the police had taken his passport to stop him leaving the country until this money was paid.

After questioning over and again how it was going to be paid and Ben saying I was his only hope of leaving Ghana as he'd tried every other way of getting the money but to no avail, he coerced me to take out a secured loan.

By this time Ben had had a lot of money from me, still promising he'd pay every penny back for the extra hotel accommodation, food & daily living bills. I believed him so helped him.

As a form of security for myself I'd asked him for a copy of his passport, which he duly sent me without question or delay. It didn't appear to have anything wrong. A condition of the loan was that I had to pay my car loan off but the remainder was sent to Ben using bank accounts he'd been able to use.

This sorry charade continues that, having no bank account there himself and not wanting to delay paying me back, he deposited the monies he was owed (for the constructional goods he'd shipped to Ghana & moved into the warehouses), got his passport returned after paying the accident compensation, booked flights to return home to the UK but was then promptly arrested at the control to be told he'd overstayed his visa and therefore owed further monies in taxes etc.

As the business money had been paid into an offshore account in my name (which I'd been encouraged to send documents to open) he wasn't able to pay up, so more money was required from me.

This was now December, so there were more hotel expenses etc. to cover. Then there was FECN documentation required to access the account, adding even further costs. I received emails purporting to be from a barrister there in Ghana giving me information on what I needed to do to obtain this. Christmas came & went and I tried getting more money to help my boyfriend, but was not able to raise the funds to cover the FECN documentation.

On 9th January 2014 I visited my bank to try to raise more funds to help my boyfriend. At this point bank staff were concerned as by now Ben Brown owed me in excess of £130,000. I had accurate record of the funds I'd sent to help him. The bank suggested I went to the local Citizens Advice Bureau, where I told my story and I and Action Fraud were informed of the scam.

Until this time I had no idea that I was being duped by the person I had fallen in love with. I was in total shock. It left me unable to sleep and eat and I found myself crying all the time. Many days I stayed in my pyjamas and I was in an awful state psychologically, feeling every emotion that you could think of. I felt suicidal.

I was consumed by the question of how somebody could tell you that they loved you but deceive in such a cruel, callous, malicious way. I felt I was living a nightmare, that one day I'd wake up and it would be over. How wrong I was.

I was grieving for both my financial losses & the relationship I'd built with Ben. It took me two weeks to tell my family about this crime, then I told my closest friends that I could trust.

I was a broken person, financially & emotionally. Even now, after all this time, it hurts, upsets me, just like it did on that day in Jan 2014.

Online dating is a very popular way for people to find companionship and romance in the 21st century. It is estimated that 39% of all marriages in 2018 were between people who had met online. Whilst many people are successfully introduced to their true love on the internet, there are also a great many people who are duped by confidence tricksters using dating and social media websites to defraud, leaving victims devastated by their crimes.

Carol is one such victim who was systematically defrauded by a person or persons using a fake dating profile to entice her to send money to them. Like many people who decide to seek romance online, Carol had suffered a long-term relationship breakdown and was looking for a fresh start. Romance fraudsters prey on these vulnerabilities and it is particularly heart-breaking that Carol was targeted at her lowest ebb. Read Carol’s story here.

However Carol wants to use her experience to help others to avoid falling victim to romance scams. Here Carol offers her top eight tips for people looking for love in cyberspace.

Validate bank accounts. It can be extremely tempting for daters to send money to the charmer romancing them online. As above, never send money to someone you have never met. However if you can’t help but be tempted, one helpful hint is to ‘validate’ the bank details provided for the transaction. This can help to reveal where a bank account is registered so that you can see if it relates in any way to the dating profile. For example, the potential suitor may claim to be from the US and stationed in Afghanistan but if a check of the bank details that they are providing to receive your funds shows it is an account registered at a branch in Leicester, UK this may raise further suspicion about the authenticity of the individual concerned. Visit SortCodes website to validate bank account details.

Contact the Against Scams team (Against-Scams@cambridgeshire.gov.uk) for more information or to become a supporter.

Previous
Scams
Next
Scam prevention resources
You are in