Cambridgeshire County Council has been awarded £550,000 by the Department for Transport (DfT) to create the UK’s first Dutch-style roundabout at Road and Queen Edith’s Way in Cambridge.

The new roundabout scheme will improve safety in the area by giving priority to pedestrians and cyclists over motorists.

The Council secured the funding after submitting a proposal to the DfT in February this year, in a bid to win part of the £7 million capital funding allocated by the Government for the 2018-19 Cycle City Ambition Safety programme.

It was a competitive process between eight Cycle Ambition Cities in the UK, of which only six were successful. Proposed schemes needed to demonstrate improvements to safety for cyclists, which may also deliver benefits for pedestrians, and for Cambridgeshire only schemes in the Greater Cambridge cycle city area were eligible.

The Road/Queen Edith’s Way roundabout is an important route for both commuters and those on their way to school or and is a location that over recent years has experienced many collisions involving cyclists.

In 2013 the Council was successful in securing funding from the DfT Cycle Safety Fund programme for a number of schemes including the Perne Road/Radegund Road roundabout. That design included aspects of a Dutch-style roundabout, including a central overrun strip that visually reduces carriageway width to generate lower speeds. This has proved to be a highly successful scheme, which has statistically eliminated reported cycle collisions at that location.

The Road scheme builds on this, going a stage further by providing cycle and pedestrian priority including zebra crossings for pedestrians, and a dedicated red cycle path around the roundabout for cyclists.

Works on site are due to commence in early 2019 and the scheme’s total cost is estimated to be £800,000. The allocation of the capital grant will complement £250,000 of local funding from Section 106 developer contributions.

Councillor Ian Bates, Cambridgeshire County Council’s Chair of the Economy and Environment Committee said, “We’re very excited to have won this funding for Cambridge. When we bid for money from the DfT and win, it frees up our Section 106 money for other projects in the local area.

“This project, which is a first not only for Cambridge but also the UK, will improve the experience for everyone using the roundabout. Cyclists and pedestrians, as well as drivers, will now have the space they need to travel safely.

“This scheme will encourage cycling amongst both adults and children in the area, which in turn will bring health benefits from physical activity of new cyclists.”

These improvements are all part of a investment in cycling schemes delivered or planned for the city and the surrounding area over the coming years by Cambridgeshire County Council and the Greater Cambridge Partnership.

Proposals will also be coming forward later this year for cycle safety improvements along Queen Edith’s Way itself. With safety at the forefront of all forthcoming cycling scheme projects, the aim is to help encourage more people to travel by two wheels. 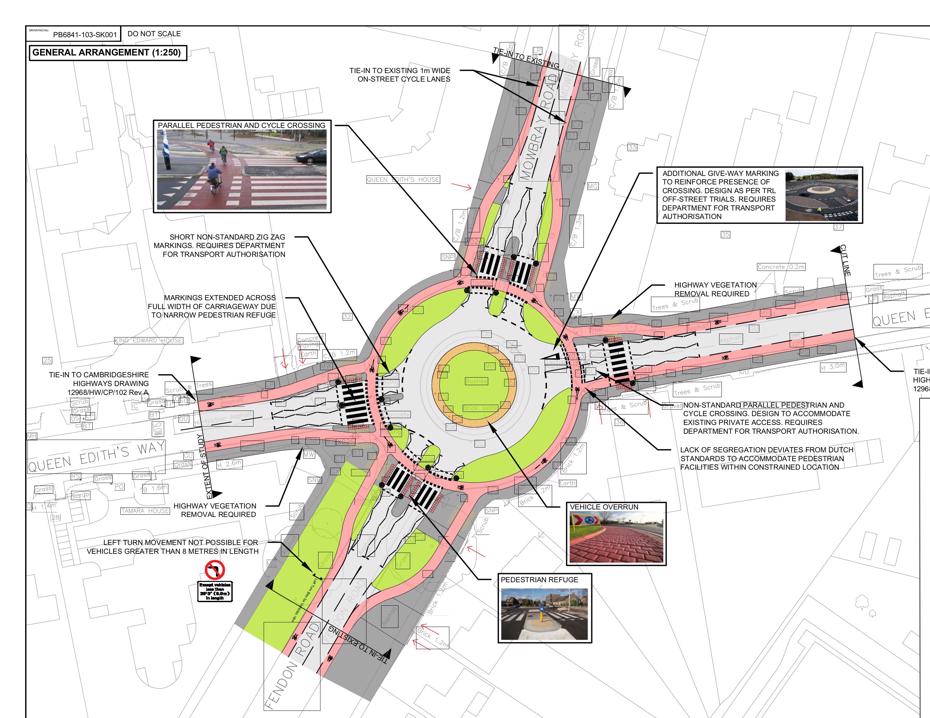 What is a Dutch-style roundabout?

The Dutch-style roundabout design for Fendon Road in Cambridge will seek to improve safety for cyclists and pedestrians in a number of ways. One of the key elements is a change in carriageway width, designed to influence slower approach and departure speeds, thereby reducing the speed of drivers.

Larger or longer vehicles have to partially use an overunnable strip in the centre of the road, which causes these drivers in particular to travel very slowly through the junction. With speeds reduced, any accidents that do occur are likely to be of much lower severity.

Pedestrians will be provided with zebra crossings on each of the four roundabout entry/exit arms, and cyclists will be given their own cycle path, in contrasting red tarmac, to give them equal priority with pedestrians over each arm.