The 2001 Local Transport Plan identified that the King's Dyke level crossing in Whittlesey was in need of replacement.

A new scheme is required to allow for housing and job growth within Whittlesey, as well as reducing journey times for those who use the route.

In peak periods, the level crossing barrier can be down for between 12 and 23 minutes per hour, resulting in significant delays to traffic. Future plans by the rail industry to increase the number of trains travelling along the route are set to further increase traffic delays.

We conducted a public consultation in 2014 on proposals to replace the level crossing. 95% of respondents supported the scheme.

58% of respondents, as well as some local businesses and Whittlesey Town Council, supported a route which would bypass the existing level crossing to the south. It involves creating two new roundabouts at Funthams Lane and the brickworks access road.

The scheme requires significant earthworks, ground stabilisation and construction of a bridge over the railway line, which can only close for very short periods of time. 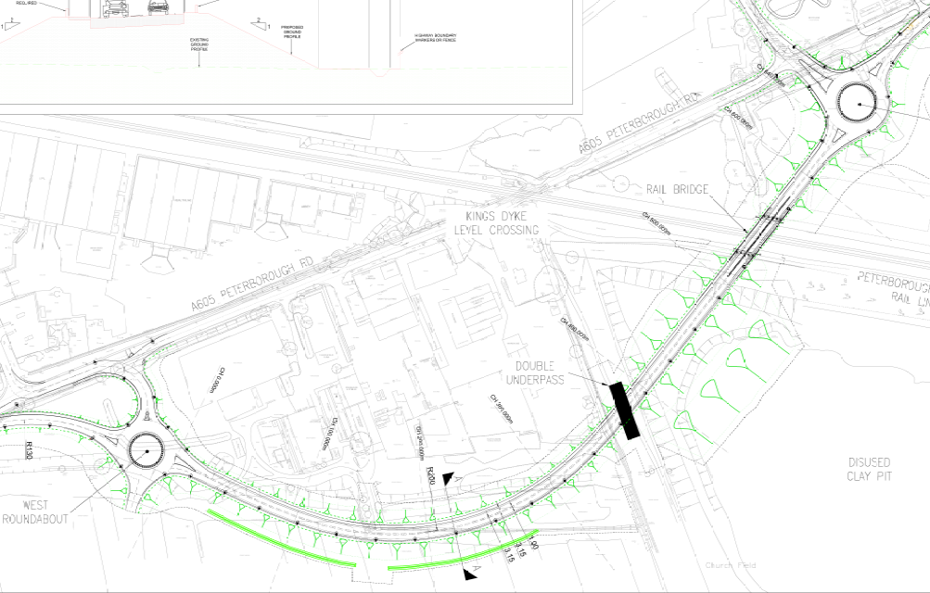 There will be no drawbacks now a new bridge over King’s Dyke Level Crossing has opened today, Monday 11 July.

Regular delays caused by passing trains will now be a thing of the past thanks to the speedy progress made by Jones Bros Civil Engineering UK. After hitting this major milestone, the civil engineering contractor will now focus its attention on the existing A605 as work enters the final stretch of the £32 million scheme.

This includes completing the eastern roundabout tie-in, which Jones Bros can only action when traffic is using the new road. There will be approximately three weeks of two-way traffic lights, operating 24 hours a day while this work is completed.

Further works include the construction of an embankment near Forterra, works at Funtham’s Lane, landscaping, and the closure and removal of the level crossing.

Jones Bros was appointed by Cambridgeshire County Council and began on site in July 2020 with works expected to continue until the end of this year. However, commuters will notice significantly reduced travel times and disruption after the eastern tie-in works are completed, with no further traffic management planned on the new road as part of the scheme.

Timeline of project so far

With all major structures now complete, our contractor Jones Bros is to begin work on connecting the new road to the existing network. They will start with the western roundabout, before switching to the eastern roundabout in late spring.

As a result, we are putting temporary traffic management measures on the road for the following periods:

There is a month-long gap between the western and eastern phases.

To minimise further disruption, we have timed the work with other highway and nearby development schemes. This is to ensure there are no instances where more than one piece of work happens on the road at the same time. However, if emergency work is required, we will react wherever possible.

It was identified in the 2001 Local Transport Plan that the King's Dyke level crossing in Whittlesey was in need of replacement.

Between 2002 and 2010, a number of bids made to Government for funding were refused.

Between 2012 and 2013, a business plan for the scheme was developed. Additional funding streams agreed with partners.

In 2014, we conducted a public consultation on proposals to replace the level crossing. Outcome of the consultation available further up the page.

10 March 2016 – Planning Committee approved plans to build a new crossing at King’s Dyke on the A605 between Whittlesey and Peterborough. This followed the Economy and Environment Committee’s approval of plans to replace the congested King’s Dyke level crossing in 2015.

10 August 2017 – Economy and Environment Committee agreed to appoint Kier as the contractor to carry out the first stage of the scheme – a detailed engineering design.

February 2018 – Officers carried out land surveys and ground investigations on-site to finalise the design in preparation for consultation.

April 2018 – Small holes were dug to record the exact locations and depths of any underground pipes or cables to find out if they need diverting or protecting before construction starts.

11 October 2018 – Economy and Environment Committee approved the award of the stage two construction contract to Kier, along with completion of land purchases.

31 October 2018 – Additional funding was approved by the Cambridgeshire and Peterborough Combined Authority at its Executive Board.

17 July 2019 – Kier submitted a final design and price for the construction phase of the King’s Dyke project.

12 August 2019 – Following an invitation from Council Leader Steve Count, more than 260 local people attended an exhibition in Whittlesey to meet with Cllr Count and officers involved in the King’s Dyke project.

15 August 2019 – Specially convened meeting of the Economy and Environment Committee held in Whittlesey. They agree to re-procure the contract using the existing scheme design.

30 September 2019 - Call for expressions of interest. Council published a notice and tender documents in the Official Journal of the European Union (OJEU). Tenders are due back by March 2020.

15 April 2020 - After receiving three bids, the Council has identified the preferred contractor to finalise the design and build contract for the King's Dyke scheme. This will now be discussed by the Economy and Environment Committee followed by the General Purposes Committee on 23 April 2020. At these meetings, the final decision to award the contract to the preferred bidder will be taken.

On Thursday 21 May 2020, Jones Bros Civil Engineering UK were confirmed as the contractor to deliver the King's Dyke level crossing closure scheme.

The tender process started in September last year and was completed on 9 April 2020. The County Council's Economy and Environment Committee and General Purposes Committee subsequently approved the award of the contract to Jones Brothers on 23 April 2020.

From Thursday 28 May 2020 for two days, Jones Bros will be on site carrying out some ground investigation work. It will be between 8am and 5pm at the western end of the scheme near Funtham's Lane and the new underpass. They will be digging holes in the fields to inspect the materials and soil qualities. No disruption will be caused on the roads and no residents will be affected.

An official start of works ceremony was held on Monday 20 July 2020. Work began five months early and includes building a new road and bridge over the Ely to Peterborough railway line. The level crossing is permanently closed as part of the work.

Work has begun on the earthworks which involves bringing in materials to construct the embankment that the new road will be built on. The main site compound will be built and, later this year, the focus will be on the structure for the underpass and bridge.

A site compound has been established and our contractors Jones Bros are currently completing works to create the supporting structure needed for the new road. This requires partially filling Star Pit Quarry. Jones Bros will soon begin work on top of the filled area to build the embankment and bypass.

We would like to thank local residents for their cooperation whilst temporary traffic lights have been needed to complete the works access near the A605.

It was recently decided that we will name the new road 'Ralph Butcher Causeway', to honour a past local councillor who campaigned for the bypass.

The teams focus is now on the project’s roads, with drainage and kerbing, the ducts which will house electrical cabling for street lighting, as well as footpaths.

The King’s Dyke project is progressing well and on track to open to traffic by the end of 2022.

The piling work at Star Pit began in September and we expect it to last until early November.

In response to ground investigation work, and to introduce extra stability, our contractors Jones Bros have designed a new, highly engineered and improved solution to tackle Star Pit and will install a piled wall.

The new design involves piling 23 metres below ground level and installing a steel reinforcement cage filled with concrete. This reinforces Star Pit side walls, allowing the road's embankment to be completed. This method is more robust and increases the longevity of the asset.

The current approved scheme budget of £32 million is made up of funding from:

There is a separate £1.5 million Covid-19 contingency budget to fund any additional costs directly associated with the project caused by the impact of Coronavirus.

This will be closed once the new road is open.

Yes, there will be eastbound and westbound bus stops at both ends of the scheme. There will be footpaths allowing easy pedestrian access to all bus stops.

Documents relating to the scheme are available to view below, including Side Roads Orders, options assessments and feasibility reports.

For more information about the scheme, please email Transport.Delivery@cambridgeshire.gov.uk or telephone 01223 699 069.