A new foot and cycle bridge will be located to the north of the Town Bridge offering a safer, traffic-free crossing of the Great Ouse. This will provide a link from Regatta Meadow to the west, and Priory Lane to the east.

From  2 July until 10 August 2018, we held a public consultation to decide how this bridge will look. Based on the results of this consultation, the suspension bridge design below was chosen and agreed to by the Economy and Environment Committee on 15 November 2018

In 2001, residents were asked for their views on the St Neots Market Town Transport Strategy. Walking and cycling improvements were felt to be important for a growing town and proposals for both a southern and northern foot and cycle bridge were supported. The southern Willow Bridge was opened in 2011, providing a safe, direct and accessible link to encourage more journeys by foot and bike.

In 2017, a public consultation was held asking St Neots residents to have their say if they supported the northern foot and cycle bridge project as a whole and which bridge location they prefer. There were 1,079 respondents, with 76.7% supporting the project and 60.6% preferring the final location shown. This was approved by Cambridgeshire County Council’s Economy and Environment Committee in December 2017.

In August 2018, we held a public consultation on three possible designs for the new bridge. A report detailing the results of this consultation was discussed at the Economy and Environment Committee on 15 November 2018. Based on these results, the suspension bridge design was chosen and agreed to. 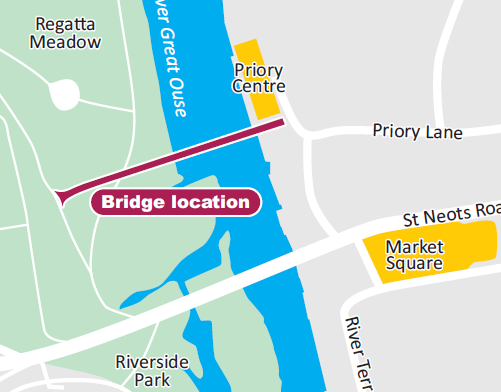 Location of new foot and cycle bridge as decided in 2017

In March 2019 the design contract for the new bridge was awarded to engineering and professional services consultancy, WSP.

This project is part of the wider Masterplan for St Neots, which is in partnership with the Combined Authority, Huntingdonshire District Council and St Neots Town Council. It brings forward £5.8 million of investment and initiatives to St. Neots to pave the way for accelerated growth.

This final report by Knight Architects below includes the Site Analysis, the initial option appraisal and the final developed scheme designs for the different bridge options.

What will happen next

Following agreement at the Economy and Environment Committee on 15 November 2018 for the suspension bridge design, below is the estimated schedule for the next phases. 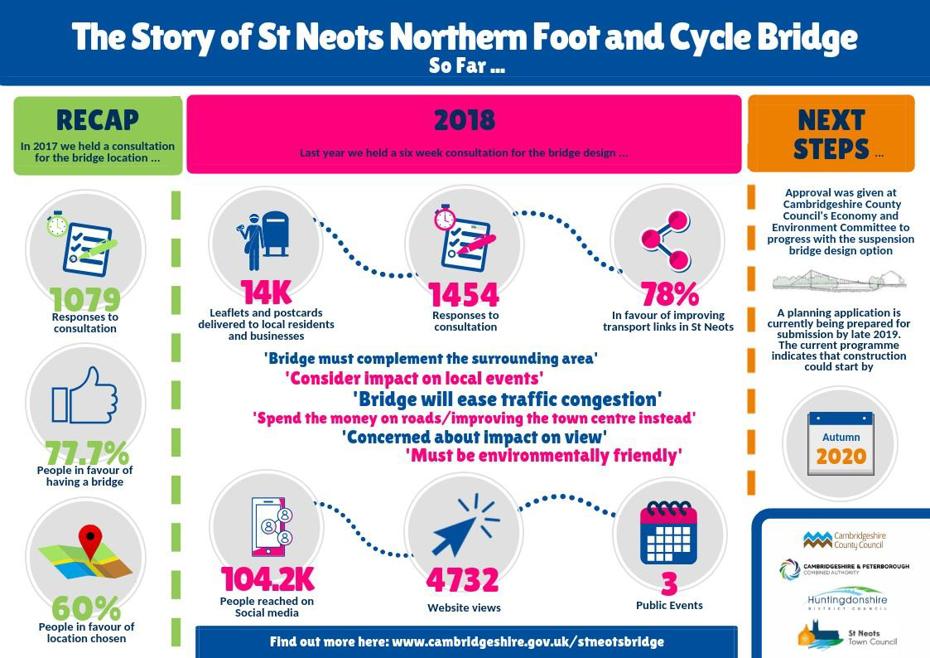 Initial cost estimates for the three bridge design options are around £4 million each. The bridge is to be funded by the Cambridgeshire and Peterborough Combined Authority and Section 106 developer contributions.