Local Highway Improvements (LHI)’s are delivered by the County Council on a joint funded basis and applicants can apply for funding of up to either £25,000 for complex projects or £10,000 for non-complex projects, as a contribution to their scheme. The applicant is expected to provide a minimum contribution of 10% towards the total scheme cost. 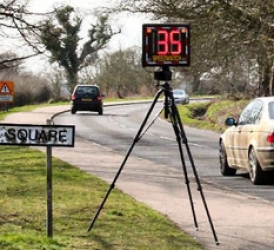 As Community Speed Watch volunteers are highly visible and make use of a speed detection device, it is usually clear to vehicle drivers their speed is being monitored. This may be enough for many motorists to slow down. Some motorists may mistake the volunteers for police officers.

The ‘community’ element of Community Speed Watch could have a more positive effect on some vehicle driver’s attitudes compared to engineering schemes.

Community Speed Watch may only reduce vehicle speeds when the volunteers are present at the road side. However, there should be a significant effect on vehicle drivers who receive letters as a result of exceeding the speed limit. Other drivers may continue to reduce their speeds at all times, as they might expect Speed Watch to return to the same place, or appear in another area.

The cost is for the Speedwatch unit only

More information from the Police

You can get more information on Community Speedwatch on the Cambridgeshire Constabulary website.

Mobile Vehicle Activated Signs (MVAS) are electronic signs which only become visible when approaching motor vehicles are exceeding a certain speed. The signs normally display the speed limit, however they can also display the actual speed on the sign and these are called Speed Indicating Devices (SID).

MVAS are formed of many bright lights which only turn on when the target motor vehicle is in plain view of the sign.

MVAS have a short-lived effectiveness in reducing speeds. Unfortunately drivers become too familiar with them when they are situated in one particular location for long periods of time. They can be most effective when positioned near downhill gradients reminding drivers who may be inadvertently speeding.

When MVAS are relocated regularly around different parts of the village or town this can increase effectiveness as drivers will be unaware of where the sign will be next time they travel.

The cost for the MVAS unit is based on one unit and two new posts.

Please note that costs above are to supply the MVAS, associated mounted equipment, spare batteries, and supply and install a number of posts for the device to be moved around.

We recognise that MVAS can be a popular speed educational tool. Should you wish to apply for permission to use them on the highway please complete this application form and return by post to the address specified or by email to policy.andregulation@cambridgeshire.gov.uk.

You will be required to agree to a Memorandum of Understanding to make sure the sign's correct use on the highway.

The speed limit regime enables traffic authorities, like Cambridgeshire, to set local speed limits in situations where local needs and conditions suggest a speed limit which is different from the standard national speed limit. Buffer zones are becoming ever popular around Cambridgeshire and generally offer a short section of 40mph approaching a village or town’s 30mph limit.  This can help to ensure that a driver is travelling more slowly on the approach to the lower limit.

Changing the speed limit and introducing nothing but a change in sign is very unlikely to ensure driver compliance on its own. If all speed limit signage were taken away, the driver should instinctively know what the speed limit is from the environment: a driver will choose different speeds for a rural road through open countryside and a built up road through a town centre.

Alternatively, the road environment should be such that higher speeds are difficult to achieve because of the nature of the road, e.g. traffic calming is present.

The buffer speed limit cost is based on two additional terminal signs and two posts with 2 pairs of repeater signs, installed under two-way lights. There is no provision for lighting the signs.

The speed limit cost is based on changes within a small village with no street lighting over a 1km stretch of road including repeater posts and roundels, installed under two-way lights. There is no provision for lighting the signs.

Gateways are designed to highlight the entrance to a Parish, Town or Village and/or change of speed limit. In Cambridgeshire the most common method is through installing gates and village name plates at the entrances to villages, often in combination with the speed limit terminal sign.

Drivers tend to notice and accept the distinction between the two speed limits when there is a more obvious presence on the entrance.

The speed reducing effect is highest when gateways are first installed.  Many drivers subconsciously adjust their speed according to the surroundings, driving more slowly in built up areas and faster in rural areas with open fields.  A gateway feature signals that a driver is leaving a higher speed area and entering residential area.  However, the benefit can reduce over time as drivers become used to them.

These gates are made from a blend of wood fibre, recycled thermoplastics and adhesive resins. They give the appearance of wood with all the longevity of plastic so they will not rot or require varnishing or painting.

The gateway cost is based on the supply and installation of two larger Glasdon Gates in a grass verge, installed under two-way lights.

Previous
Speeding
Next
Horizontal speeding treatments
You are in