Work is carried out safely whilst adhering to the government guidelines and where materials are available. This will be continually monitored. Any work is being carried out in accordance with government health and safety measures, with workforces practising social distancing.

In terms of surface treatments, the Micro Asphalt summer programme that would usually take place between April and June was cancelled due to the Coronavirus pandemic. The programme will be rescheduled for 2021. The Micro Asphalt autumn programme for 2020 will be going ahead.

All the work dates listed are indicative only. These treatments can only be laid in good weather and work will need to be postponed if it is wet or raining. Any postponements will then cause knock on delays to street works later in the program. Please keep an eye out for local signage, check our upcoming roadwork information on our roadworks and traffic webpage, or follow us on Twitter at Cambs Traffic for the most up to date information on where we will be working.

In autumn 2020, we will begin a programme of works to carry out carriageway Micro Asphalt surface treatments to 69 roads across the county.

We will close all roads during work operations. Where appropriate, diversion routes will be in place. Operatives will man closure points to provide advice on timings and access. Access to properties inside the closure will be possible, but is dependent on work operations at the time it is requested. It is essential that no vehicles are parked on the road during the works.

Advance warning signs will be placed on site a minimum of 14 days in advance of works. Properties within the closure will receive a letter about the works.

Please be aware that Micro Asphalt surface treatments are weather dependent and works may be subject to changes at short notice.

What to expect if your road is being treated

Advanced warning signs will be placed on the roads affected at least seven days of the work's start date. For our annual surface treatments, residents will receive a leaflet from us informing them of what works are taking place on their street. For our other roadworks, properties directly impacted by works will receive a letter detailing the exact times of the works.

While the work is happening, we ask all residents to not park their car on the road that is being worked on. We will need access to the whole road at all times.

For surface treatment works, roads may need to close. In those cases, a diversion route will be signed (unless it's a cul-de-sac road). If you live on a road where works are taking place and your access is blocked, please speak to staff on site. Access for residents of the road may be allowed, however you may need to wait until it’s safe to do so or you may be required to use a different route. Anyone who can avoid the road should do so while works are underway.

For diversion routes, we use the same or higher category of road as the road that is closed. This is to ensure the diversion route can cope with all the same types of traffic as the closed road. In some rural locations, a lesser category route may be agreed to when there is no other alternative.

Only our approved diversion route will be sign posted. However there are often locally known roads which vehicles can choose to use instead. We have no powers to prevent highway users using these alternative routes.

Please take care when driving on the newly laid surface as there is likely to be some loose chippings. Until we have returned to the site to sweep away loose chippings, please follow temporary speed limit signage.

See below our information leaflets for residents affected by the works:

Surface treatments across Cambridgeshire consist of a number of different varieties, all are designed to seal the surface, add texture and conformity and extend the life expectancy of the road.

The varieties we use are surface dressing, Micro Asphalt, Footway Slurry Seal, and Retread.

Surface dressing can be disruptive and may require the road to be closed temporarily. Once completed, it can receive traffic immediately provided speeds stay below 20 miles per hour.

Surface dressing is very weather dependent and cannot happen if it's too hot, too cold or wet. This means the work schedule can change at short notice. The season for this treatment generally runs from April to September.

Surface dressing is a robust and cost effective method of maintaining our roads. It is a preventative treatment so will not repair roads that have structural issues, and will not alter the shape of a road. Some roads with minor defects can be treated, following planned preparation work in advance.

The road surface is sprayed with a coating of liquid bitumen. Stone chippings are then rolled onto the road to form a water resistant, protective layer.

The object of surface dressing is to prevent potholes and extend the life of a road for up to 10 years. It will give the road added texture, improving skid resistance, and give conformity to a heavily scarred surface.

Video of our Etnyre machine in action:

Micro Asphalt can be laid in temperatures as low as 5 degrees, which means the laying season can extend  from early March to mid-November. The process can only be laid in dry weather so the work schedule may change if it's wet. It is also normally a requirement that the road is closed whilst the work is carried out.

A more enhanced variant of Micro Asphalt, called Grip Fibre may be considered for use on busier roads as it is stronger. The season for laying this runs from May to August.

This surface treatment is best used on roads which show early stages of wear and tear. It is laid over the top of an existing road surface. The effect of this treatment is to protect and seal the surface of the road thus preventing further deterioration and extending the life of the road. It also assists road safety by improving skid resistance.

Before treatment, the road is swept to remove any loose material and any ironwork is masked with tape. Following the treatment the masking is removed and if needed, the ironwork will be adjusted in the near future. Traffic can use the road 20 minutes after the material is laid but a 20 miles per hour speed limit will be in place.

The road will normally shed some stone over the first few weeks after treatment. This is typical and will be subject to sweeping as required. The new surface is very black and does appear slightly messy shortly after it is laid. This is normal and usually settles down after a number of weeks.

A low cost preventative maintenance process, designed to seal in the surface of a structurally sound footway and prolong its life.

It is not suitable for a footway that is not in a structurally acceptable condition and does not add strength. It will fill minor depressions and voids and provide a more even surface, improving the quality of slip resistance.

Slurry is a mixture of bitumen emulsion, aggregate and water spread over the existing footway and brushed to give a textured finish. It may be necessary to prepare the existing surface by cleaning, weed spray, minimal patching and raising ironwork.

Although a quick process, the surface will remain wet for several hours following treatment and the treated footway will need to remain closed until it dries. As with all thin coat surfacing, the process is weather and temperature dependent. 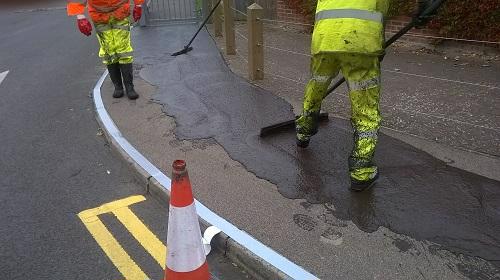 A process where the existing surface is planed up, re-graded and re-profiled on site. It is then compacted down and receives either a surface treatment or a tarmac over lay. The road will require to be closed throughout the process, and depending on the size of the site, this may be for several days. It is suitable for roads that have deteriorated further, but do not have a particularly heavy traffic flow.